The Hornets bowed out of the Carabao Cup tonight and they can have few complaints. They were beaten fair and square by a hungrier, sharper and busier Newport County side who claimed their second Championship scalp of the competition.

Head Coach Vladimir Ivić rung the changes following the energy-sapping draw at Sheffield Wednesday and ahead of the first derby in 14 years on Saturday and got the sort of disjointed first-half performance you can often get when eight of the starting 11 had only six Watford starts before the game.

They didn't quite give themselves a mountain to climb by conceding twice in the space of ten first-half minutes, but it was certainly the steepest of hills in a part of the world renowned for its ascents and valleys. Although they had a bit of a go at the start of the second half, sparked by a tactical and personnel switch by Ivić, and pulled one back through Adalberto Peñaranda from the spot just before the hour, Watford could have few complaints about their exit from the league knockout competition. A third goal, from Pardaig Amond, on 65 minutes killed off any hopes of a second successive escape act in this competition. A bad night got worse when Stipe Perica was sent off late on for violent conduct. 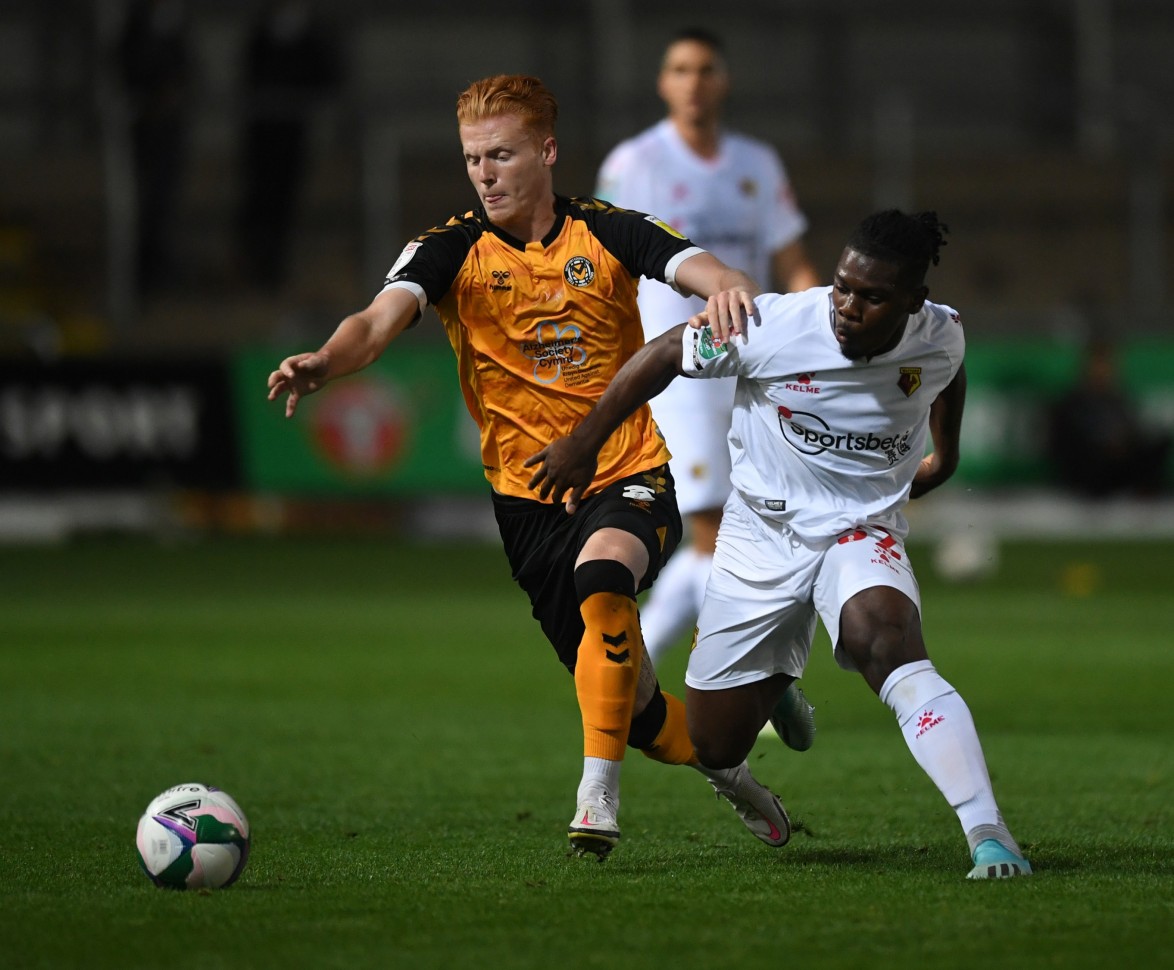 Defeat will rankle with Ivić, that serial winner from Serbia who launched his coaching career by lifting a domestic trophy in Greece, but he knows he has not been recruited to win a cup. Promotion is the sole aim and nobody will remember this defeat at the end of the season if all goes to plan, just like one had to double check it was Doncaster who knocked the Golden Boys out of the same competition during the thrilling promotion season of 2014/15.

It was a classic mix of youth and experience Ivić opted for here at Rodney Parade. He had two teenagers and one 20-year-old in a central midfield three and then a 30-year-old centre-half behind them and a wily striker in front of them who had 330 Premier League appearances between them. It was going to be asking a lot for them to gel and play with cohesion and so it proved.

With Josh Sheehan pulling the strings from the middle of midfield, Newport looked very neat and tidy on an immaculate pitch and you can see why they knocked out Swansea last time out. You expected them to try and probe their way through and past the three-man Watford backline so it was something of a surprise that they caused such havoc from set-pieces. Indeed the visitors were forced to get everyone back for the deliveries that came in from all angles. They looked a threat every time the ball was slung into the danger zone. Ignacio Pussetto was lucky not to give away a penalty for handball before Toby Stevenson was eventually fingered by the referee for a pull in the box. Tristan Abrahams made no mistake from the spot, sending Daniel Bachmann the wrong way. 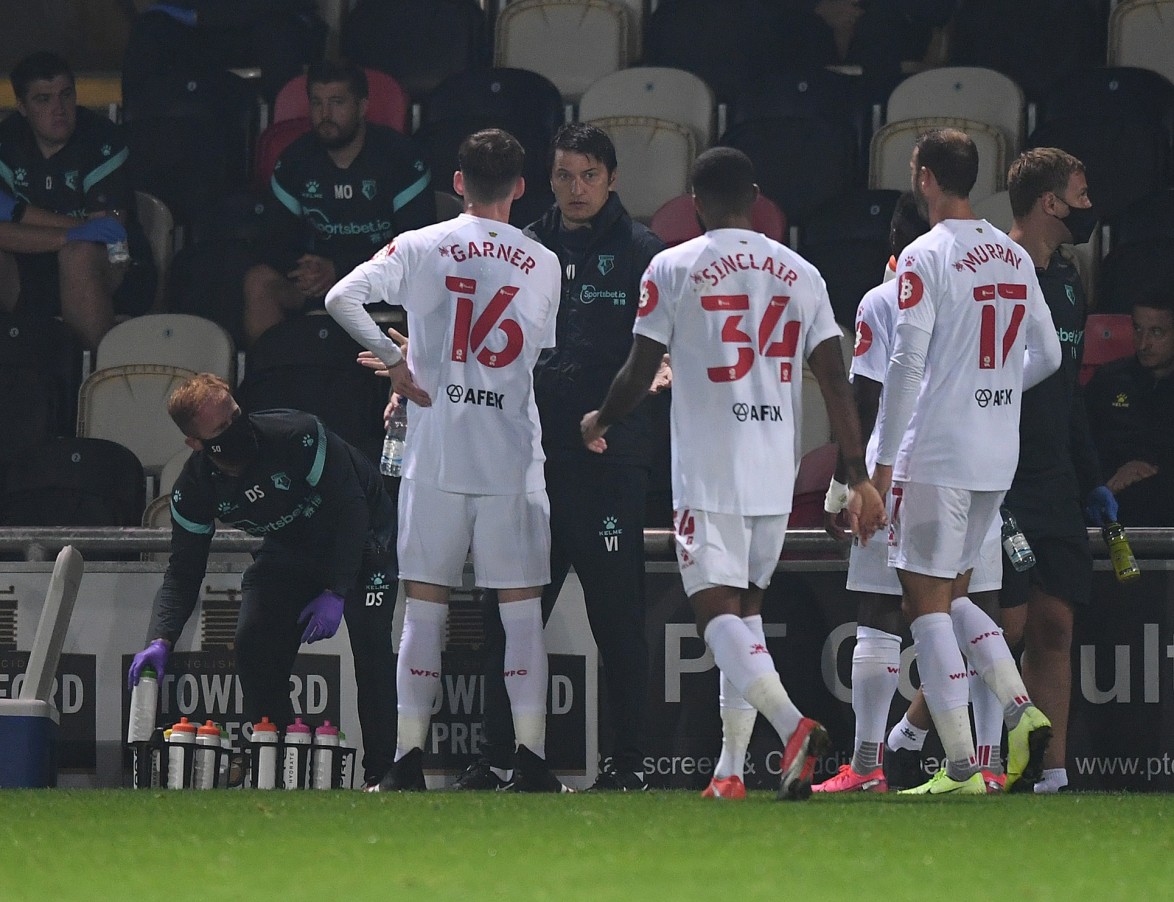 Bachmann would have been hoping for a quieter night than he had at the Kassam Stadium last week, but he was in the thick of the action again here. He was on hand to make a fine one-handed save from Amond soon after that matched anything he did at Oxford, the sort of one that falls into the category of keeping your side in it when you reflect on a come-from-behind win.

Sadly, it went to waste as, what felt like less than 60 second later, Joss Labadie scored from distance with one that left Bachmann with no chance. It could have been three had Abrahams not planted a header just wide in first-half injury time.

Ivić needed to take decisive action and he did just that. He sent immediately for Stipe Perica and Peñaranda, two players with Serie A experience, and switched to a 4-2-3-1. 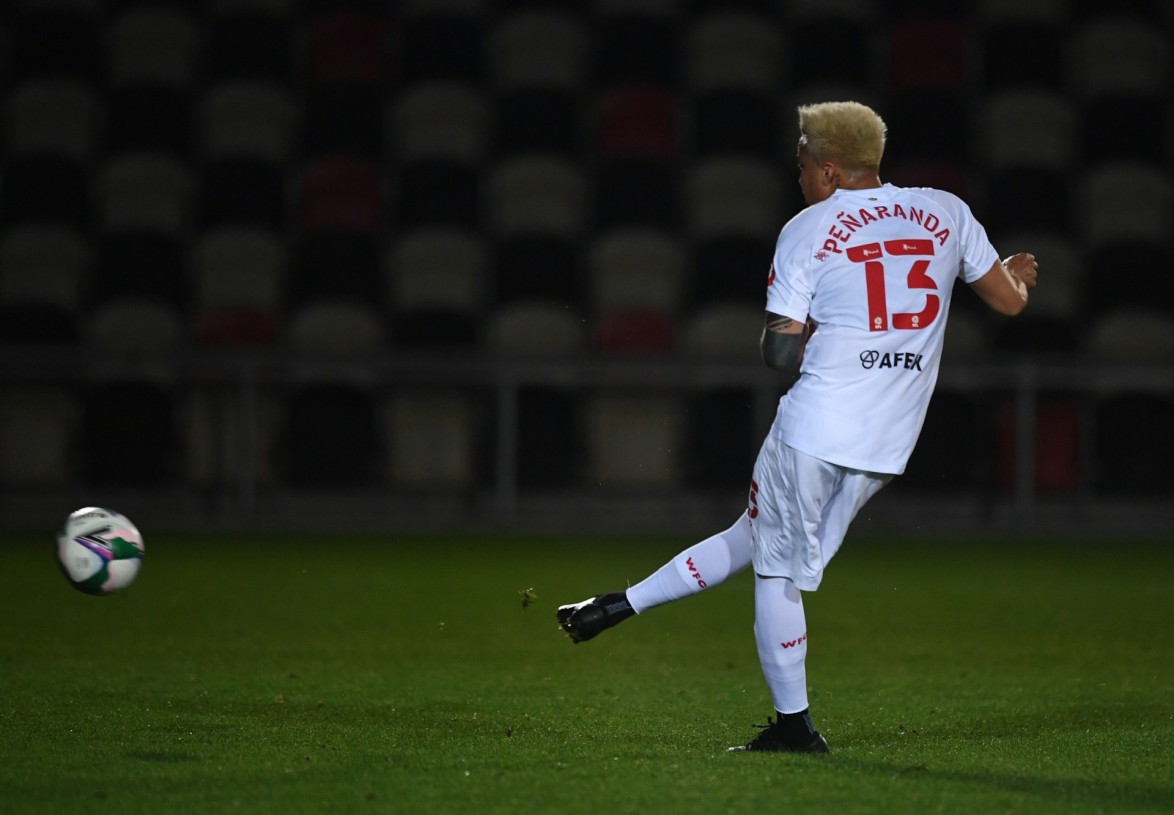 The change worked a treat and within nine minutes the visitors had a lifeline. Pussetto was shoved over in the box and Peñaranda, after much debate with Perica over who should take it, stroked one straight down the middle. Game on.

Phillips crunched into a tackle in the middle of midfield and then Dawson hurled himself in front of a shot. This was more like it. They were just building up a head of steam and starting to play with a pattern and a purpose when Amond pounced on a mistake and rifled one in the bottom corner for Newport's third.

It was one of those nights when little went right and that was confirmed when Perica was shown a straight red card at the end. Newport are through to the fourth round for the first time in their history and the Hornets are out. It will all be forgotten, however, if they beat old foes Luton on Saturday.