The Hornets served up a five-goal thriller for the second successive home game, producing the perfect response to those fans who regrettably missed the one three days earlier on Hive Live and leaving themselves in a wonderful position to launch a promotion bid of some substance.

Technical issues outside of the club's control meant those Hornets suffering at home missed the cracker against Stoke City, but the team showed it was no fluke by doing it again, this time against Coventry and even more dramatically with all five goals coming in a madcap second-half. The fans might even need to watch a re-run to check this one unfolded the way it did. They'll certainly have plenty of time during this month-long lockdown to do so.

There was absolutely no sign of the goal rush to come after a fairly lifeless first-half, which featured just one shot on target. Things then exploded into life in the second period, with five goals in just over half an hour. Ismaïla Sarr won it again, this time from the spot despite the presence of the 400th appearance boy and penalty king Troy Deeney on the pitch. It was that sort of afternoon when little made sense but the upshot is the Hornets are one point off the top and looking a real dangerous prospect now the goals are starting to flow, particularly at home. This is now the third time in four games they have found the back of the net three times and no other side in the league has won more points on their own patch this season. Not many will look forward to coming here, that's for sure. 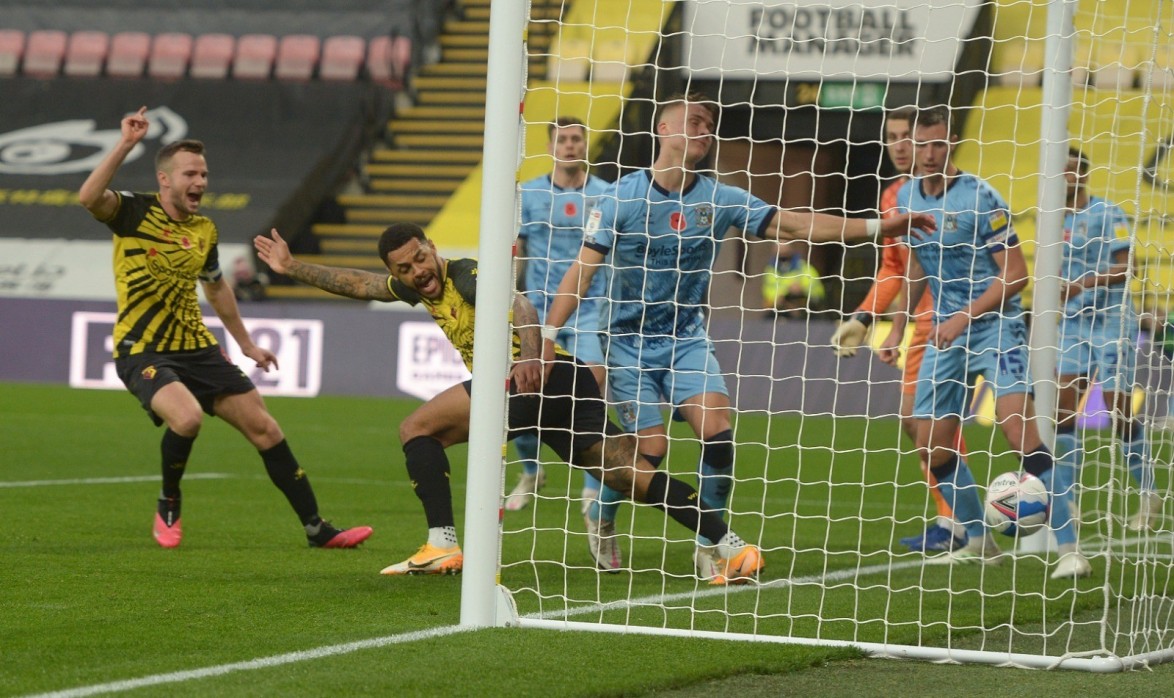 The first half only ended all square thanks to a goal-saving tackle from Christian Kabasele. Maxime Biamou, lurking at the far post like all good No.9s, looked certain to the roll a delicious low centre from the right into the back of the net, but the Belgium international defender produced a wonderful smothering, sliding intervention to deny Biamou the chance to beat Ben Foster from close range on 36 minutes. It was right up there with the defensive contributions Kabasele has produced since signing from Genk more than four years ago.

Biamou had a couple of chances before that, one from distance that flew over and a header he nodded wide from a Ryan Giles cross. That flurry of chances was reflective of a nice spell from the visitors who made of a mockery of the difference in places between fourth top and fourth bottom. They were very progressive, very neat and tidy and weaved some nice attacking patterns. 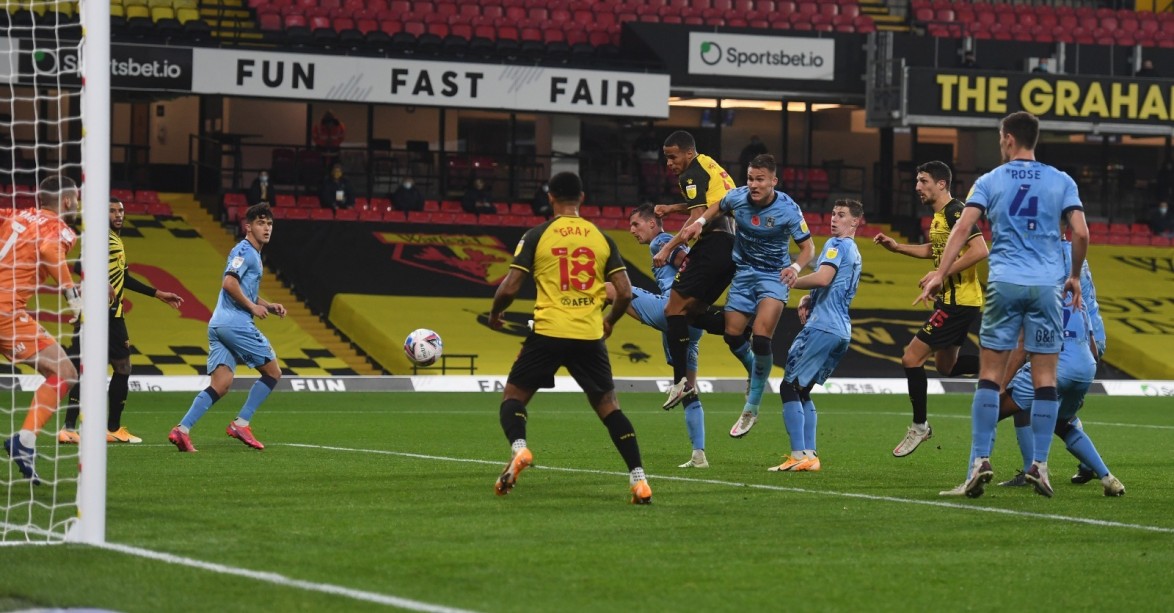 The stats made it look like the Hornets made the most of the running: 51 per cent of the ball, seven shots to the visitors' five and winning the corner count six-nil but they never ever had things all their own way and managed to engineer just the one shot on target in the first 45 minutes – and that came right at the end of the half when Tom Cleverley forced a flying near-post save from Marko Maroši after hitting one with the element of surprise from a short corner.

There were a couple of low crosses across the face from Sarr, a neat reverse pass from the restored James Garner and a trademark cross-field pass from Étienne Capoue, this time to Ken Sema with his left foot, but the attacking fluency was not quite there.

Coventry were at it again at the very start of the second half, forcing a smart tip over from the airborne Foster with a rising drive on the angle from Callum O'Hare. Something was needed to spark the Hornets into life, a bit of inspiration, and it was Capoue, that multi-talented midfield operator, who provided it. He unfurled another of those cross-field passes, again with his weaker left foot. It was played with such weight and precision that Sema was able to take it in his stride, push it past his man with his first touch and punch it across the face of goal. And there was Gray, the arch poacher, to bundle it home. 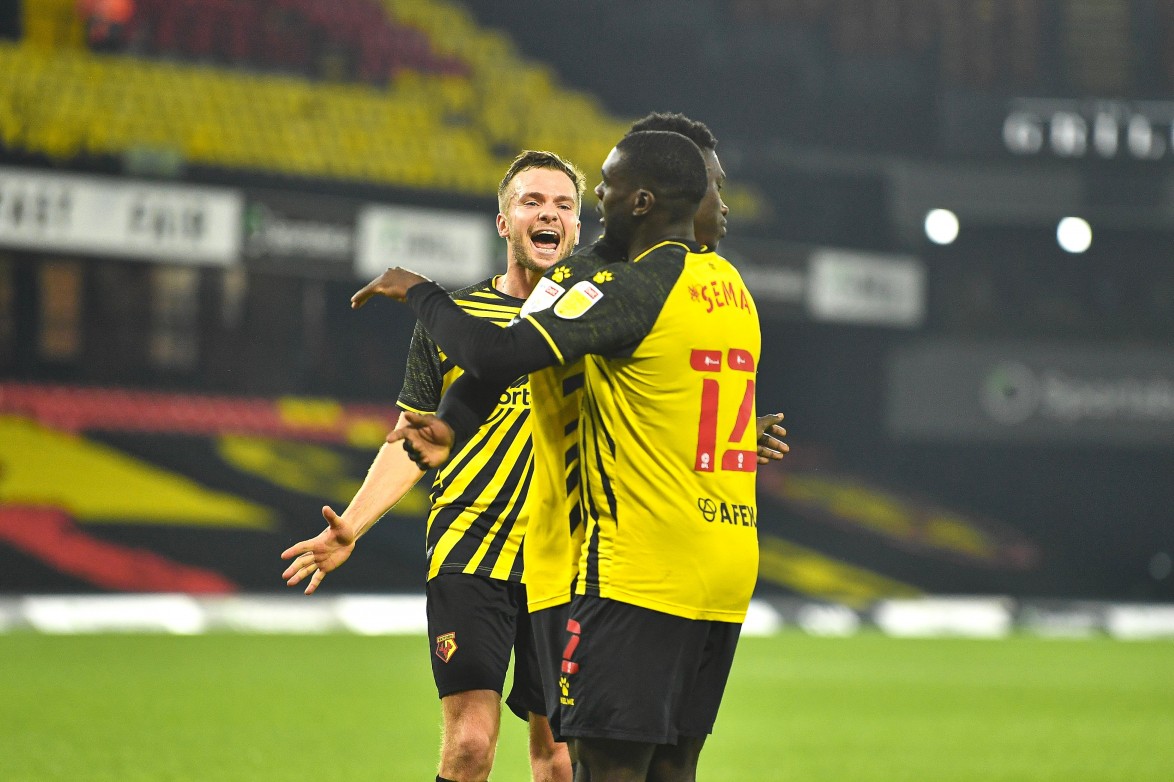 You hoped the Hornets might kick on from there and either pull clear or shut the game down, but they did neither. Coventry got a second wind and scored twice in 60 seconds through Gustavo Hamer and Tyler Walker to completely turn the match on its head.

You wondered exactly where the game was heading at that point, just which way it might swing next. The next goal was going to be prove decisive and fortunately for those of a yellow persuasion, it came for the home side when William Troost-Ekong rose at the near post to head in a Garner corner. What a time to net your first goal for the club. Fortunately for those of a nervous disposition, that was the end of the scoring for a while, but only a little while.

There was one more turn to come and it proved a decisive one. Sarr won a penalty for the second successive match, this time via a hand ball from a cross he attempted to clip over O'Hare, and stepped up to take it, despite the imposing presence of Deeney on the field. What a script that would have been on his landmark appearance for the club, to ram in the winning penalty against a team from the Midlands, but Sarr was having none of it and rolled the ball in like a seasoned spot-kick taker with seven minutes to go. And that's how it stayed. Everyone probably needs the international break after this bonkers game to get their breath back.